However, for left-handed people, this is a common question.

Most scissors are made with right-handed people in mind, but there are also scissors made for left-handed use.

This article will explain everything you will need to know about the difference between right and left-handed scissors: 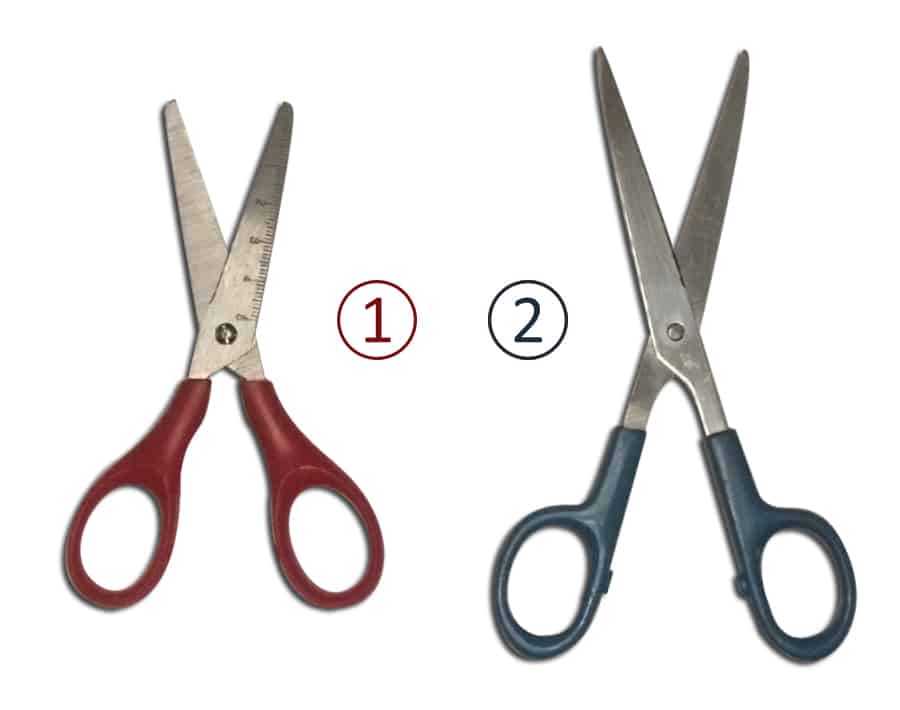 How Do You Know If Your Scissors are Right/Left-Handed?

There are a few different ways to identify the difference between right and left-handed scissors:

Sometimes, you can tell the difference between right and left-handed scissors by looking at the handle color. This is most common in children’s scissors.

Traditionally, for these scissors, green handles indicate that the scissors are left-handed and blue indicates that they are right-handed.

However, scissor handles come in many colors for design, aesthetics, and other purposes. So if they are not identified by color, how else can you tell what type of scissor you are dealing with?

Some people think that handles are the trick to determining what type of scissors you are dealing with.

Think about it: when you use scissors, one handle is bigger than the other to accommodate different fingers.

This, however, is not the way to determine if you have right or left-handed scissors, but when you get the right pair of scissors with well-positioned handles, it can make a difference.

The best way to determine what type of scissors you are working with is the blades on the pair of scissors.

To really know for sure if you have a pair of right or left-handed scissors, you need to look at how the blades are attached.

No matter how you turn the scissors, the blades will always be the same, right on top, left on the bottom.

That’s how you know you are dealing with a pair of left-handed scissors.

Is There a Scissor that is Ambidextrous?

While some companies might claim that their scissors are ambidextrous, this is not true.

There is no such thing as a scissor made for both hands. You cannot make a scissor with the blades switch positions.

Can You Use Right-Handed Scissors With Your Left Hand?

It would be best to always use the scissors made for your dominant hand.

If you are using scissors made for your non-dominant hand, you might find it challenging because the blade will be in the way of seeing the line you are cutting.

If you watch small children cut things, you might notice left-handed kids with incorrect scissors move them or look at their work at odd angles. This is compensation for having the wrong pair.

This is not unique to children. All people need the scissors that work best for them.

It is not impossible to use the incorrect scissors; however, it is much harder and more uncomfortable.

If you are left-handed, you should invest in a pair of left-handed scissors.

This will help you avoid many issues you could experience from using the wrong scissors.

These issues could include:

These problems come from the scissors not being made to fit your hand properly.

Another issue you could run into is not getting a good enough cut by using the wrong scissors due to the position of the blades.

Can’t I Just Use My Non-Dominant Hand?

Some left-handed people try to use their right hand when using scissors.

This is especially common in the older generation, where left-handed tools weren’t as readily available, and not everyone knew to make special considerations for left-handed people.

While this is possible, it’s possible that you will not be able to make as clean or as strong of a cut as you would with your dominant hand.

With left-handed scissors available, why would you make yourself use the wrong hand?

What Brands of Scissors are ONLY Right/Left-Handed?

When looking for scissors, you will want to make sure you are not only finding the scissors that work for your dominant hand, but you also want scissors made for the purpose you are using them for.

There is a big difference between fabric scissors, paper scissors, hair cutting scissors, and other types of scissors.

Once you determine what type of scissors you need, you can look for left-handed options.

Left-handed scissors might be harder to find, as they are less common, but they are out there.

Are Left-Handed Scissors Harder to Find?

Depending on where you are shopping, it can be harder to find left-handed scissors. This is because left-handed people are the minority, and fewer people use them.

This doesn’t mean they are impossible to find, though.

Most stores will have a set of left-handed scissors, and if they don’t, you can find them on Amazon or even order them online at your local craft store.

Plus, once you find a pair, they should last you a long time! You can even sharpen them if you need to.

You want to pay attention to the blades and not the handle when you buy left-handed scissors.

Unfortunately, left-handed scissors can be more expensive than their right-handed counterparts.

Now, the question you are probably asking is: why?

There is no “one answer,” but some reasons could explain it.

While making left-handed scissors is not more expensive, companies order fewer of them at once. This could increase manufacturing costs, as the more you order to produce, the less expensive it normally is per unit.

This cost can sometimes be passed on to the consumer.

However, as previously mentioned, once purchased, they will last.

In conclusion, left-handed scissors are very important for those who need them.

They can be more comfortable, cut better, and not force left-handed people to learn to use their other hands.

They are identified by how their blades work and can be more difficult to find.

Once you find them, they can be more expensive than other types of scissors. However, you can always sharpen them to extend their life to last you a long time, and you won’t be stuck looking for a new pair.