Whether you’ve dabbled in some sewing in the past or are deeply immersed in it at present, you probably know that sewing depends largely on the tiny things.

The needle, for example, needs you to be extremely cautious; and that thread really gets you squinting when you’re putting it through the needle’s eye. Even with the advanced, more convenient sewing machines, you’ve still got to consider each nut and bolt.

Speaking of sewing machines and tiny things, let’s talk about that tiny thing that’s tucked away safely in a compartment at your sewing machine’s base. This object makes putting together that hanky, skirt, or pair of slacks possible.

Can you use a sewing machine without a bobbin?

You can’t sew without a bobbin, as the machine requires two spools in order to operate properly. Therefore, you will need to add the bobbin thread in addition to your needle thread.

The bobbin is, firstly, small, but it can come in different shapes: the L Style Bobbin, Class 15 (A-Style) Bobbin, M Style Bobbin, Singer #8228;… the list goes on! Many of these can be made from either plastic, metal, or wood.

Its primary purpose is for the bottom thread (placed underneath the feed dog) of the sewing machine to be wound around it, whether self-wound or pre-wound.

Let’s continue exploring the Bobbin and its uses in this article! 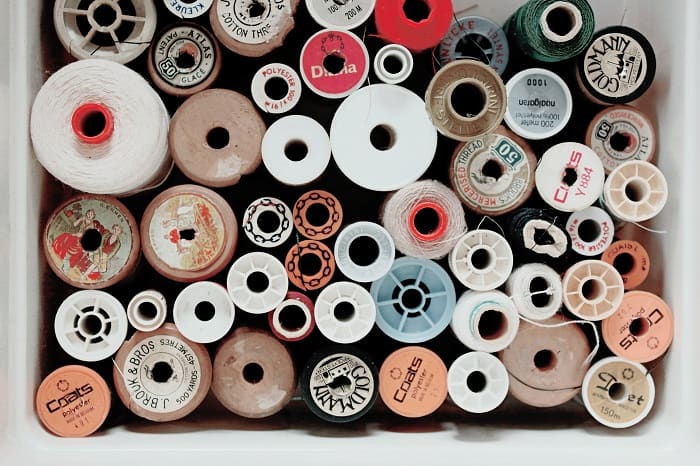 What Happens if You Sew Without a Bobbin Thread?

When you are sewing by hand, a single spool of thread can get you far; but when it comes to your sewing machine, you’ll be needing two spools!

Your top thread isn’t all you’ll be running on. In addition to your needle thread, you’ll need a second one to loop it with: the bobbin thread.

Sewing machines today, industrial or domestic, most commonly use a stitch called the lockstitch and are, in turn, called lockstitch machines. The lockstitch is formed by linking together two separate threads of the sewing machine: the needle thread and the bobbin thread.

This allows you to go about your everyday sewing projects otherwise known as construction sewing.

If you then attempt sewing without a bobbin thread, the needle’s thread would not stay in place. This defeats the end of the sewing machine.

Basically, when you try to “sew” with a lockstitch machine but no bobbin thread, you don’t sew at all.

What’s The Primary Purpose of the Bobbin Thread?

To really sew something together, especially with the common sewing machine, a lockstitch must be created. This is necessary to secure the sewn fabric.

The upper thread can immediately be seen in the needle. The lower thread, however, is concealed beneath the feed dog. This means you might not always see it while you’re stitching away.

However, doing a good job at securing the bobbin thread is key to having a fine finished product!.

These two threads work hand in hand to form a joint stitch. One cannot be without the other.

This joint stitch is very important because that will allow the threads to remain intact on the fabric being sewn on.

Do All Sewing Machines Have Bobbins?

As mentioned earlier, lockstitch sewing machines the most commonly used machine for sewing greatly rely on bobbins to get the sewing done; but there are other kinds of sewing machines that are specially designed to be without a bobbin.

One distinctive example is being the chainstitch sewing machine.

These types of machines utilize the top thread to loop with itself and create a stitch (called a chainstitch) that will hold the fabric together.

However, this mechanism isn’t quite as preferred as the trusty lockstitch machine.

Do You Need a Bobbin for Embroidery?

When using an embroidery machine, a bobbin is a necessity for different reasons.

The first and perhaps most obvious reason is that embroidery machines need a bobbin to keep the stitches firmly in place, just like a regular machine used for construction sewing.

The second reason is that bobbin thread, as it is characteristically lighter than regular thread, ensures that the backside of embroidery is less dense than the front.

This keeps the cloth from crumpling or the thread from birdnesting (that’s when thread bunches up and ruins your embroidery yikes!).

If you’re embroidering by hand, you won’t need to worry about a bottom bobbin thread. However, the thread used by bobbins can prove to be pivotal in your embroidery experience, whether with a machine or by hand.

The bobbin thread, given that it’s characteristically light, well suits an embroidery project.

7 Things to Check When Inserting the Bobbin:

Before you pop in that bobbin, you need to make sure it can get nice and comfortable in its home: the bobbin compartment.

If in the future, you find yourself scratching your head wondering why your stitch isn’t turning out as nicely as you had planned, it would be wise to check on a number of things concerning your bobbin.

This way, you can use your bobbin to its full potential:

1. Picking the Right Bobbin for your Machine:

If you use a bobbin that isn’t intended for your sewing machine, don’t expect it to run smoothly.

Don’t just use any old bobbins lying around! When buying brand new ones, make sure it’s the exact bobbin your machine requires.

And if you see a bobbin that looks just like what suits your machine, but it’s made of a different material (e.g., it’s wood when it should be plastic or vice versa), you’re better off taking a pass on it.

Refer to your machine’s user manual to be certain.

2. Does Your Machine Have a Top-Loading or Front-Loading Bobbin Case?

It’s important to consider what kind of bobbin case you have.

A front-loading bobbin case, on the other hand, tends to be detachable. This is normal for more classic machines. Once you get a hold of the bobbin, you can wind it clockwise.

Either way, your bobbin case is likely to illustrate symbols to guide you in winding it.

Before any sewing project, try to see if your bobbin is properly wound.

If you find that it isn’t, wind it in such a way that the thread isn’t all over the place.

You may not see the bobbin while you’re sewing, but the bobbin’s state will really show itself in your work.

Take care of your bobbin!

It is always helpful to check on your bobbin thread’s tension.

You can do this by taking your wound bobbin and holding it by the end string. Try shaking it to see whether it unravels a little.

If it doesn’t even move an inch, the tension is probably set too high. You should then adjust the tension accordingly.

A little dirt can mess up an entire project.

This isn’t an exaggeration. Imagine the production failures you could encounter all because of a soiled bobbin.

You might be using rusty bobbins, too. If you have those hanging around, it’s best for you to oil them.

It is also important to replace your bobbins every once in a while if oiling doesn’t do the job.

Give that bobbin thread some space to breathe.

This will cause some serious issues with the bobbin’s functionality. It might even make it harder for you to secure it in the bobbin compartment.

Jampacking your bobbin might seem like a good idea if you want to run out of thread a little less often, but it’s not.

If you have always disliked running out of bottom thread, then you might have tried winding more thread onto your bobbin than appropriate.

We’ve established in the last item why this is a bad idea.

If running out of bottom thread annoys you, then it would do you good to keep an extra bobbin as a replacement for when the bobbin you’re using runs out.

A bobbin is a small part of your sewing machine, but it makes all the difference!

Some machines like chainstitch machines might only need the needle thread to create a stitch, but in the most common lockstitch machine, a bobbin is your needle’s best friend.

The same goes for embroidering with your sewing machine; the bobbin retains its position. And when you’re embroidering by hand, you should consider the type of thread that is used for bobbins.

But because it’s so minuscule, it’s easy to forget that the bobbin needs to get the right amount of care. Your bobbin should be evaluated regularly, before and after use.

By now, you probably have a newfound appreciation for your bobbin, which can help you scale great sewing heights!