There are a lot of different ways you can use embroidery to create images on fabric that will transform any project.

Embroidery has been around for ages and varies based on time period as well as region. There are many countries around the world that used embroidery as an expression of art in many different ways.

I have included some examples below:

When you think of Ukraine, one artform that might spring to mind is embroidery.

Embroidery in Ukraine is an ancient tradition that dates back to the Crimean Tartars, which are a group recognized as an indigenous group to Ukraine.

The style of Ukraine embroidery is normally described as simple but elegant. The designs are often described as being floral as well as noble and beautiful.

Embroidery in Ukraine can vary based on region or even between villages. But there is a common thread when you look at the embroidery as a whole.

Some different styles of Ukrainian embroidery include:

While many elements of Ukrainian embroidery differ from region to region, one common thread is the pattern.

From region to region one common design that is included when it comes to Ukrainian embroidery is that they use strong geometric patterns mixed with floral elements.

This is a common theme in all Ukrainian embroidery.

Color patterns are less uniform when it comes to Ukrainian embroidery and can vary from region to region.

In Central and Eastern Ukraine they tend to use more pale colors than the rest of the region. Some colors included in this color palette include pale blue, pale green, grey tones, light ochre, and white.

Western Ukraine sticks to traditional coloring including red and blue coloring. Eventually, they did incorporate blue, green, and yellow.

Northern Ukraine uses red, blue, and black as their most utilized color scheme.

Similar to Ukraine, Palestine has featured embroidery for hundreds of years.

Palestinian embroidery has a great meaning in their traditional clothing.

Color, stitch type, and other features of Palestinian embroidery vary based on the time period and geographical location that the embroidery was completed in.

There are two main stitch types that are used in Palestinian embroidery.

When cross-stitching, you will want to count the threads going in each direction so that your image is uniform in size and appearance.

Couch-stitching is a different, lesser-known technique where you stitch yarn to your background fabric with very small stitches. You can stitch the yarn using the same color or different colors, depending on the aesthetic that you are trying to achieve.

Designs tended to be more geometric and form patterns such as pointed start, chevron, and squares.

They also liked to create designs that were inspired by nature including flowers and trees.

As previously mentioned, the location the embroidery was completed made a lot of difference when it came to patterns and colors that were commonly used.

The color in the embroidery was also used as symbolism. In some regions, a woman would wear black with blue embroidery and could begin to wear dresses decorated with red after marriage.

You could also count on gold or silver thread being used on wealthier citizen’s clothing.

Tunisia is known for a very elaborate form of embroidery.

They pour a lot of meaning into their embroidery and each specific choice is a representation of something.

Tunisian embroidery is not only elaborate in design, but there is a lot of embellishments that are used that elevate the design.

Tunisian designs are known to include additions such as gems, sequins, silver plates, pearls, and other decorative embellishments.

The design of Tunisian embroidery can tell you a lot about the wearer. Just by looking at one embroidered article of clothing, you can tell whether or not the owner is wealthy or poor, their occupation, where they live, whether or not they are single or married, and much more.

Patterns used can either be simple and beautiful, or elaborate and intricate.

Either way, they are striking and follow traditional meanings.

The most striking identifier of Tunisian embroidery is the gold thread that is used.

The gold used not only shows wealth and elegance, but it is a bold and striking color.

Another sign of wealth is that the material used is often velvet or silk. This expensive material combined with gold thread and the variety of embellishments means that whoever owns these pieces are wealthy and important.

Serbian embroidery is the main technique that is used to decorate their folk clothes.

Serbians have a knack for mixing patterns, colors, and techniques in a way that is appealing and harmonious.

Similar to the other countries listed, Serbian embroidery has a variety of pattern types.

You can see geometric patterns in Serbian embroidery as well as floral patterns.

Serbian embroidery is a mixture of a few different types of embroidery styles that were adapted together such as the Ottoman, Balkan, Byzantine, and Slavonic aspects.

Another striking feature that you might notice in Serbian clothing is the different cuts of the garments.

There are different colors used in Serbian embroidery but the most common color used is red.

Red is not the only color used though and they do a good job mixing a variety of colors in the same way that they mix patterns and cuts.

Serbian embroidery is often rich and bright but in a way that does not look tacky and instead looks royal and elegant.

Embroidery is an ancient and meaningful way to decorate clothing and other fabric items and has been used all over the world.

Embroidery is still popular today and pulls inspiration from both traditional embroidery and modern twists on embroidery designs.

Embroidery is a great way to use thread to elevate any project that you are working on, and whether your design is floral, geometric, or using a different aesthetic, it can really bring your fabric to a new level.

We love sewing! Maria has decades of experience, sewing everyday clothes and wedding dresses. >> About us 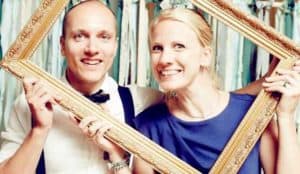 We get compensated for sending traffic to brands and companies we work with.