To keep your scissors working correctly and making perfectly clean cuts, you will want to keep them from getting rusty.

Rust can limit the motion of your blades and leave behind rust stains on your fabric.

Let’s take a look at how you can keep your scissors from rusting and remove any rust spots before it becomes too big of a problem: 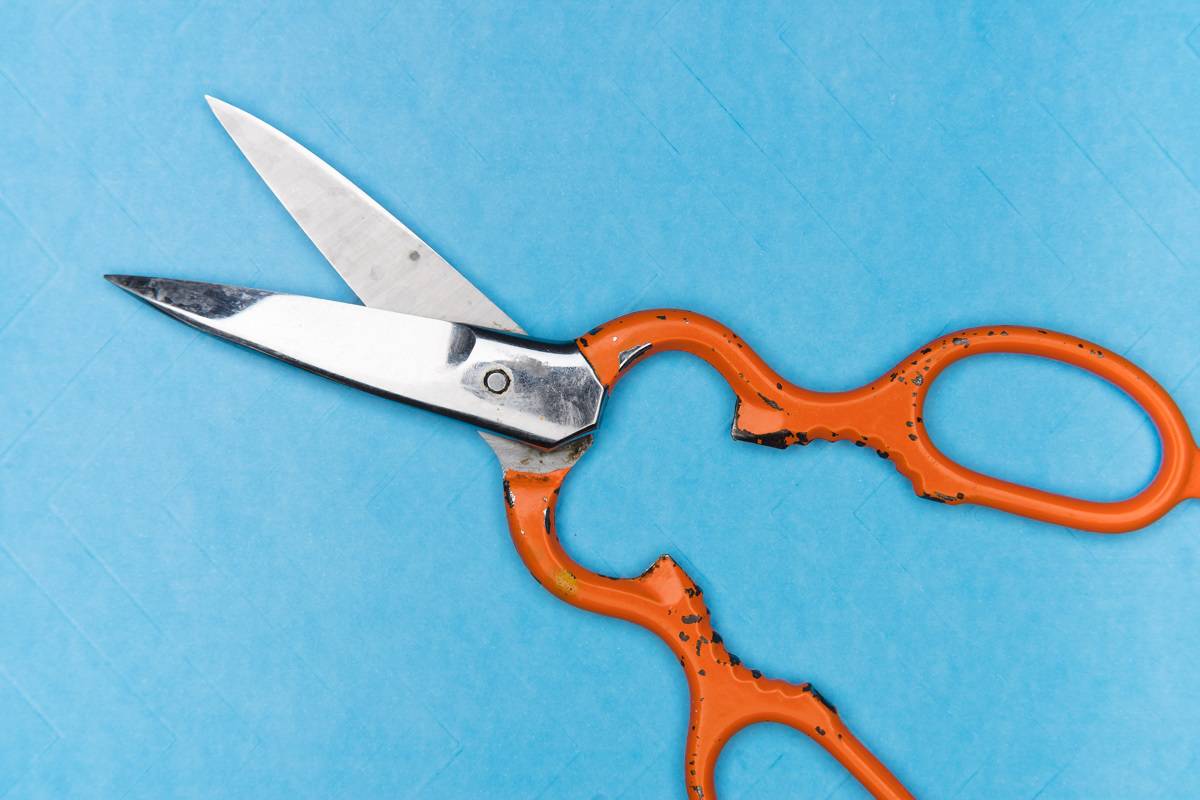 Keep Your Scissors Away From Water

If you notice any spots of rust on your scissors, resist any urge to clean them off with water. Water can encourage the rusting process and encourage even more rust spots to appear on the blades of your scissors.

Rust occurs when oxygen and water collect on certain metals. You may have noticed tools that turned rusty after being left out in the rain. The water mixes with the air on metal to provide the perfect conditions to begin the corrosion process.

To learn more about the scientific reason why water can make metal objects rust, you can check out this quick informational video on YouTube:

Keep Your Scissors Out of the Dishwasher

If you have a dishwasher in your home, remember that these machines are not designed to clean scissors.

You might be tempted to throw your scissors in with your dirty dishes to give them a thorough cleaning, but this can seriously rust your scissors.

The detergents used in the dishwasher can break down the top layer found on stainless steel blades to protect them from rusting. Once this layer is compromised, your scissors will be much more likely to rust when exposed to a bit of moisture.

Going through a dishwashing cycle exposes your scissors to far too much moisture. Exposure to this moisture and oxygen causes metal to rust, so you could be encouraging your scissors to rust by placing them in the dishwasher.

If your scissors seem to have a buildup of gunk on them that you are having difficulty removing, try using a bit of paint thinner on the blades.

Paint thinner can be harsh, so make sure you use it in an area with plenty of ventilation and take the proper safety precautions.

If you have used soap and water to clean off dirty blades, make sure you dry your scissors with great care. Make sure there is not a spec of moisture on them by the time you store them.

Use Vinegar On Any Rusty Spots

If you’ve already got rust spots on your scissors, you will need to find a way to remove them and keep them from multiplying.

Luckily, one of the most effective solutions is a simple DIY solution. Grab a large cup and a bottle of vinegar from your kitchen to get started.

Inexpensive distilled white vinegar is very effective at removing rust from metal. You might already have a bottle in your kitchen or can easily pick one up from any grocery store.

Fill a cup with vinegar and place the scissors inside for this method. Ensure that any rusty part of the blade is completely submerged in vinegar.

Leave your scissors soaking in the cup for about 24 hours. The vinegar can cause rust to melt off the metal.

You will notice the vinegar color changing as the rust transfers from the blades into the liquid.

You might need to scrub the blades a bit after soaking is complete for more serious buildups of rust. You can use an old toothbrush and a cloth to scrub away any remaining spots of rust.

The vinegar will loosen up the rust, so it should come off easily when you take a toothbrush to it.

This method works well for restoring a pair of seriously rusted blades and erasing small spots of rust. You can use it as needed to keep your scissors in great shape and free from rust.

Use a Rust Eraser On Any Rusty Spots

You can use a rust eraser to remove spots from knives, scissors, or other corroded metal objects in your home.

Your rust eraser will have a grainier feel than a standard pencil eraser. This texture helps erase rust on the blades more effectively and with less effort.

To get started shopping for a rust eraser, you can check out this 2 Piece Rust Eraser set by Censen here on Amazon. Having a set of rust erasers on hand helps you prevent further corrosion by erasing the first sign of rust on your scissors.

Use a Pencil Eraser On Any Rusty Spots

Like how you use a rust eraser to scrub away rust on the blades of your scissors, you can use a pencil eraser for a similar result.

Grab any household eraser, like the one on the end of a pencil or your office supplies. Rub the eraser back and forth on the rust spot to help reduce and remove them.

This DIY technique may not remove the rust completely, but it is a good temporary fix to get your scissors cleaned up before pursuing other methods.

When using a pencil eraser, you will have to apply more pressure than using a special rust eraser. By applying a little elbow grease, you should be able to remove any light rust or tarnish from your blades.

Can You Restore Rusty Scissors?

Please don’t throw out a pair of rusty scissors, no matter how bad they look.

Soaking in vinegar has done wonders for even the rustiest tools. Even if your scissors are completely immobile due to corrosion, 24 hours in vinegar can make a difference.

If they are caked in rust, you will want to have a stiff toothbrush or similar tool on hand to scrub with after soaking. Let the affected area soak completely in vinegar for 24 hours and scrub off any remaining rust when the time is up.

You can use a cloth to help wipe away any remaining traces of rust.

Rust grows into more and more rust, so removing it early will save you work further down the line.

Keeping your scissors rust-free will help increase their lifespan and performance.

Can You Sharpen Rusty Scissors?

Before sharpening scissors, you will want to remove the rust. Depending on the amount of rust you face, you can choose one of the methods listed above.

For serious corrosion cases, vinegar will be the best choice. A little scrubbing with a rust eraser should do the trick for milder rust issues.

If you have used a rust eraser on your scissors, you will want to wipe all of the grit off before sharpening completely.

If you don’t clean your blades thoroughly between erasing and sharpening, you can create scratches on the blade.

To wipe off any grit and leftover abrasive particles, wipe the blades with a clean cloth. Wipe several times to ensure all the loose eraser residue has been removed.

If your blades have rusted along the edge, they can easily leave a stain on the fabric as they cut.

If you notice a brown line appearing on your fabric as you cut, check to see if there are rust spots on the blades of your scissors.

If this is happening to you, take some time to remove the rust through one of the methods listed above. Once the scissors are rust-free, you will be able to continue cutting without leaving any marks behind.

If you need to get rust stains out of your fabric, you can easily do this with household products. You can soak the area in distilled white vinegar and help remove the stain by rubbing the wet area with a cloth.

Using lemon on rust stains has also been effective at lightening and removing the marks completely.

Remember that rust occurs when moisture and air mix on the metal blades. Keeping your scissors away from water and drying them thoroughly will help keep them from rusting.

If you notice any spots of rust, you can use vinegar, a rust eraser, or a regular pencil eraser to lighten and remove these spots. Try to remove rust as early as possible to keep the problem from getting any worse.

Get Set Clean: How to Clean Rust Stains from Your Clothes Effectively

The Kitchn: 4 Ways to Fix a Rusty Knife or Scissors

Martha Stewart: How to Sharpen, Clean, and Care for Your Scissors