Using a pair of scissors intended for a right-handed person can pose a real challenge for left-handed crafters.

Unfortunately for lefties, scissors are often designed by default for right-handed folk. This can make it uncomfortable and awkward for left-handed people to make clean cuts comfortably.

Right-handed scissors are constructed with the top blade on the right side. This gets in the way of a lefty’s line of sight to what they are cutting, and it causes the blades to separate and cut poorly when used in the left hand. 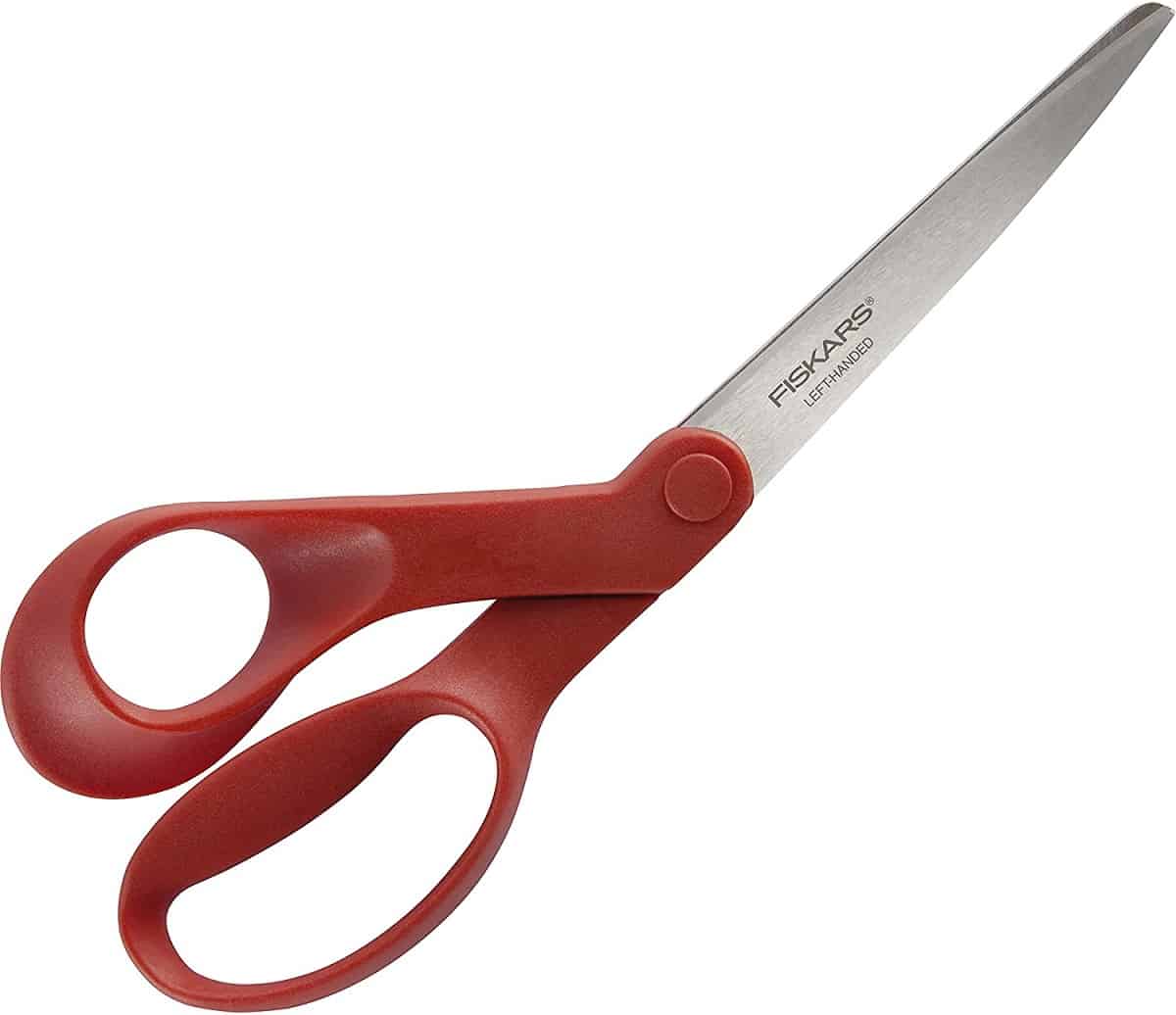 Why Do Right-Handed Scissors Not Work with Left Hands?

While a left-handed person can use a pair of right-handed scissors, it is certainly not ideal.

The grip can feel uncomfortable, the blades will start to act strangely, and the user won’t be able to see where the scissor is cutting the material directly.

Left and right-handed scissors are constructed differently, making the experience very different for the user. It’s not just a matter of finger grip the real difference lies in the blade assembly.

One main issue right-handed scissors don’t work for left-handed people is the position of the upper blade. When the blade is on the opposite side, it obstructs the user’s vision and makes the scissors difficult to use.

When using scissors meant for the other dominant hand, you will struggle to see the cuts you are making in the fabric. This can make it hard to cut your fabric accurately.

Another big problem for lefties has to do with the mechanics of the scissors as we squeeze them.

We might think we are only applying downward pressure when using scissors, but this isn’t the whole story.

When we squeeze the handles of a pair of scissors together, we are applying pressure downward and sideways simultaneously.

To understand this better, you can observe your thumb as you cut with scissors designed for your dominant hand. You can see your thumb isn’t moving straight up and down but rather applying a touch of pressure from the side. Your thumb’s motion will appear slightly diagonal or rounded as it operates the scissors.

Because of these mechanics, lefties pull the blades apart as they cut with right-handed scissors. As this happens, the left-handed user can experience a real struggle depending on the material they are working with.

As the blades pull apart, paper can bend and tear instead of cut. Material can become messy and frayed or fail to cut at all.

When lefties get a pair of left-handed scissors, they no longer face this problem. The pressure from their hand will work correctly and let them make clean cuts that they can see properly as they work.

To check out all the mechanics involved when you squeeze your scissors to cut, you can watch this short video on YouTube:

Why Are Right-Handed Scissors Uncomfortable for Lefties?

Left-handed people have developed their fine motor skills dominantly in their left hands.

Like writing, they will need to use their dominant hand to get the job done with a pair of scissors. They cannot just switch hands to cut when only right-handed scissors are around.

While this adaptation may help them see what they’re doing, it is certainly more inconvenient than being able to use scissors as they were intended to be used.

As lefties try to cut with right-handed scissors, they may become frustrated with the blades as they pull apart and cut poorly. The lefty might try to overcompensate by squeezing the blades together harder to cut accurately.

This will not yield very successful cutting results. It often causes the user’s hand to hurt and ache from all the force they had to use. This can be compounded with finger grips designed for the comfort of right-handed users, causing extra discomfort for the lefty user.

Why Aren’t All Scissors Universal for Both Hands?

One pair requires the top blade to be on the left while the other requires it to be on the right. There is no way to build both designs into one single pair of scissors.

Remember, it’s not about the handle shape or adding extra comfort to the grip. It’s about the assembly of the blades that makes the real difference.

If you have right-handed and left-handed people in the same house, you will need separate pairs of scissors to accommodate each of them. More and more manufacturers are creating high-quality left-handed scissors, so getting your favorite scissors for either hand is easier.

Are There Universal Scissors Brands?

You might have seen the term “universal” commonly used when shopping for scissors.

Keep in mind that if you see this term applied to scissors, it generally describes the materials you can use the scissors on. It is not a statement that you can universally use these scissors for both left and right-handed individuals.

It is usually used to imply that you can use these scissors effectively on a wide range of household materials. It does not mean that these scissors are ambidextrous.

If you look closer at the packaging, you should be able to find information about what hand these scissors are meant for.

Some brands might also describe their handles as “universal” since they have two evenly-sized grips that are symmetrical. While this might give a left-handed user a slight improvement in comfort, this doesn’t make them true universal scissors.

The blade needs to be positioned properly for a left-handed user to make a real difference in the user’s comfort. Improvement in the grip alone will not make much of a difference.

Left-handed scissors are the exact mirror image of a right-handed pair of scissors.

While they are still less common than right-handed scissors, their need is becoming more and more acknowledged. Many manufacturers have responded by making left-handed options available.

You can tell a true pair of left-handed scissors by opening the blades. Place your scissors on the table with the handle and the blades facing away.

Open the blades and see where the top blade is pointing. The top blade of a left-handed scissor will always point to the left side.

It doesn’t matter if you flip them over. The top blade will continue to point to your left side.

If you are looking for a high-quality pair of left-handed Fiskars, you can check out this pair of stainless steel cutting shears here on Amazon!

Check Out The Current Prices Here!

These are a reputable and affordable option with a true left-handed design.

You might have better luck online since you can easily search for all the available options.

Because of how the blades are assembled on a pair of scissors, it’s impossible to have one truly ambidextrous pair.

Right-handed scissors will have the top blade on the right-hand side. Left-handed users will struggle to make accurate cuts as the blades move away from each other when pressure is applied by the left hand.

They will also have a hard time seeing the cuts they are making since the top blade will block their line of sight. For best results, lefties should seek out left-handed scissors.

Griffin: What’s the Difference Between Left and Right Handed Scissors?