Many people don’t know what the colors and number on the sewing machine needles mean. We have put together an easy and quick guide that everybody can understand.

What do the colors and numbers on sewing needles mean? The numbers indicate how robust the needle is. Higher numbers for heavy fabric and lower numbers for fine fabric. The colors show

That’s the quick answer. Now let’s dive a little deeper and learn the basics about needles. 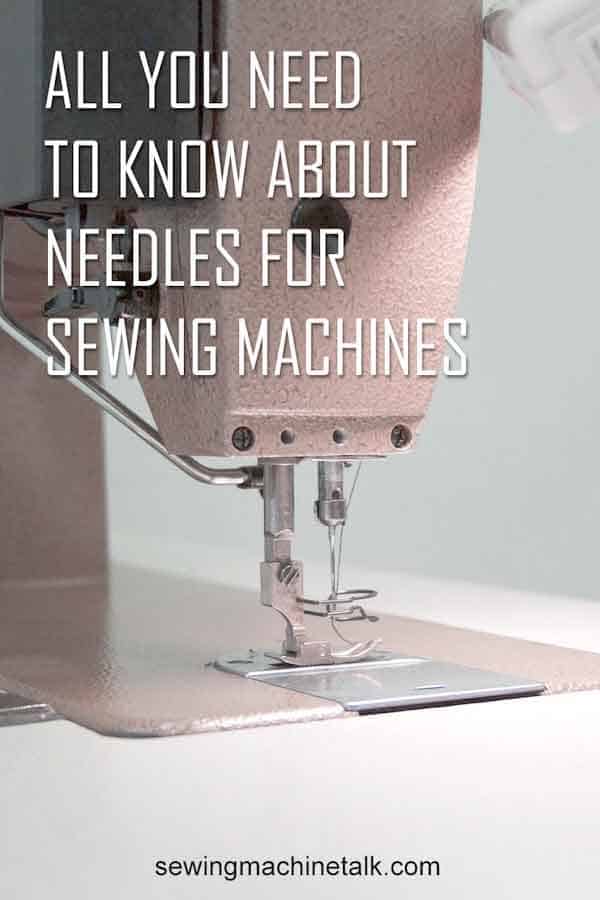 It’s important to know the basics about needles for the sewing machine before you start your first projects. There are lots of different needles, and they are made for different purposes and types of fabrics.

The numbers on the needles

The numbers are listed in two different rows, one for use in the U.S and one to be used in Europe.

It can be a little confusing at first, but you will soon learn the numbers by heart. Until then we have made a little chart for you here:
[su_spacer]

[su_spacer]
We have tried to list most of the fabric types, so you will know which needle to use.

If you are confused or don’t find your type of fabric on the list, just go with a medium size universal needle. That will be your choice for most projects.

The colors of the needles

The manufacturers are not using the color codes consistently, but if you stick to the same brand, you should find the same types of needles packaged with the same color on the packaging.

So what are the types of needles? Let’s have a look.

The parts of the needles

The needles consist of several parts: 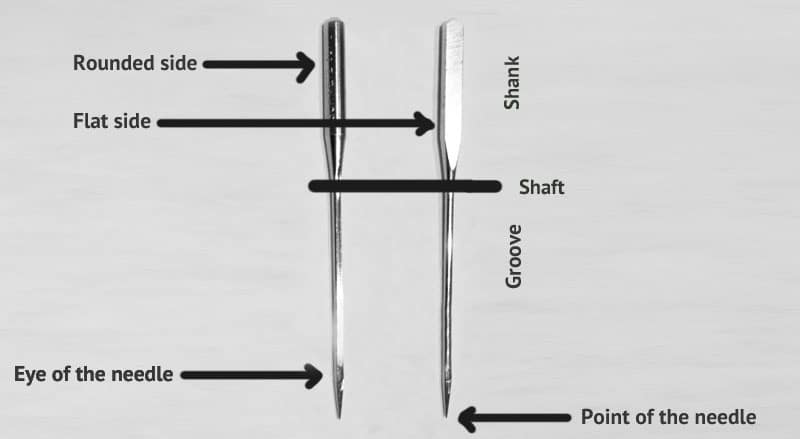 Now we covered the needles sizes, and know what the numbers stand for. let’s look at the different types of needles.

These are the needles you will use most of the time. They are for woven and knit fabric and can be used in most cases. If you don’t know which needle to use you should always go with this one.

It’s the standard needle that will get most of your everyday projects done.

These are needles with a rounded tip. They are not sharp but round, so it won’t pierce the fabric. Instead, it will press the yarns in the fabric aside, and slide in between the yarns. The ballpoint needle can also be a twin needle.

Read more about when you use a ballpoint twin needle (stretch material). These needles are for stretchy fabric.

You would think these are the same as ballpoint needles, but they differ. These needles are also (as the name indicates) for stretchy fabrics, but they are specifically for two-way stretch fabrics such as lycra and spandex.

They are for thicker types of fabric than the ballpoint types, and they are a little more pointy, but still rounded on the tip.

These needles are specially made to sew denim, jeans, and canvas fabric. They are heavy needles that are very durable. These types of fabric are tough and need special needles just like leather (below).

The twin needle looks like an ordinary needle at the top. It has a standard shaft, but then branches out and has two needles: 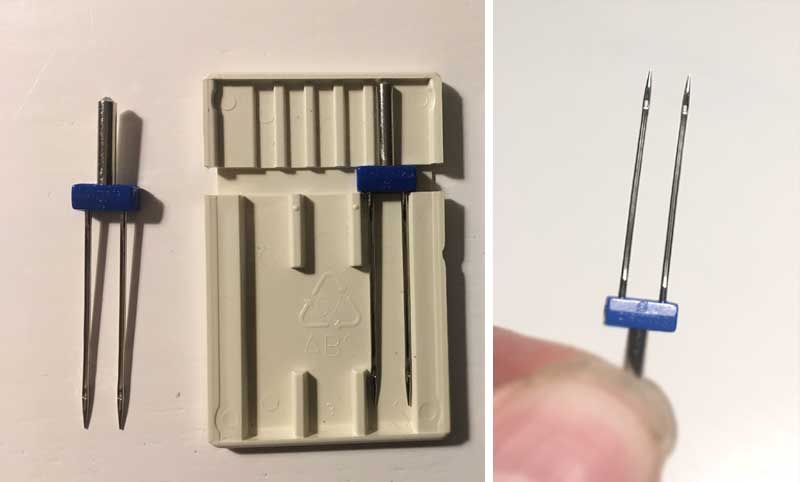 And as you have probably guessed, the triple stitch needle has three needles.

These types of needles are often used for decorative work, and the twin ballpoint needles are specially made for sewing hems on stretchy fabric.

These are very robust and thick needles, that will be able to sew leather, vinyl, and other thick types of fabric. You need a heavy duty machine to do so like the Singer 4411.

A topstitch needle is special because the little hole is double the size of an ordinary needle. These are a good choice if you are using an extra thick thread or a poor quality thread, as it will prevent the thread from breaking.

This is also great if you have trouble seeing the hole. Maybe you are visually impaired or elderly. Read more here about sewing machines for the elderly.

The topstitch type is also thicker and will easily go through multiple layers of fabric.

These are made people who have a hard time getting the thread through the hole. These needles are easier to thread the needle.

The way this is done is by running the thread down the side of the needle, and it will jump into the hole. The hole is “opened” on the one side. because they have a little hole on the side as you can see in this little video: 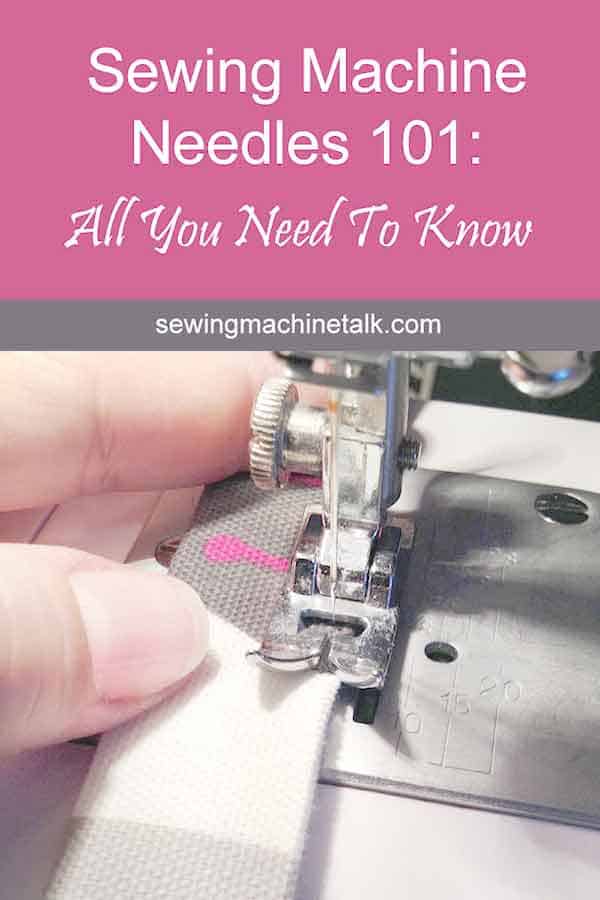 What happens if I use the wrong size needle?

Things can go really wrong if you use the wrong needle size.

Let’s first look at what happens if you use a needle that is too thin.

When the needle is too thin

You will also get bird nesting on the back of the fabric (when the thread makes an ugly knot). A fine needle on denim will surely bend, break, and skip stitches.

In the worst cases, a bent needle can go in and break on the inside of the machine. It can get stuck inside the machine and do damage.

When the needle is too thick

Either way, the result will not be optimal, so you should always make sure you are using the right needle size.

Make it a habit to always check the needle before you start sewing.

Which brands are best?

That really depends on your sewing style as well as the machine you use. Everyone should experiment with different brands to find out what they like and what works best with their machine.

Some will swear to a specific type of needle. We don’t recommend one brand over the other, because they work differently with each machine.

Some needles will not sit well on some machine while it will be totally different for another person on another machine.

If you are having a problem with your needles, just try another brand or the next size (up or down), and see if the problem persists. You will probably get the best result from using needles made by your sewing machine brand.

So if you have a Singer, try and start out with singer needles. If you have a Janome, try the Janome needles first and so on.

You might find that your type of machine will need a slightly different needle than the machine on which you learned to sew.