Singer and Brother are by far the two biggest sewing machine brands in the U.S. as well as in many other countries. So what should you buy?

The two sewing machine brands have their differences, which we will look at in this blog post.

We will start by looking at the differences and then we will compare specific models and types of machines. Such as sergers/overlockers, quilting machines, embroidery machines, and heavy duty machines. 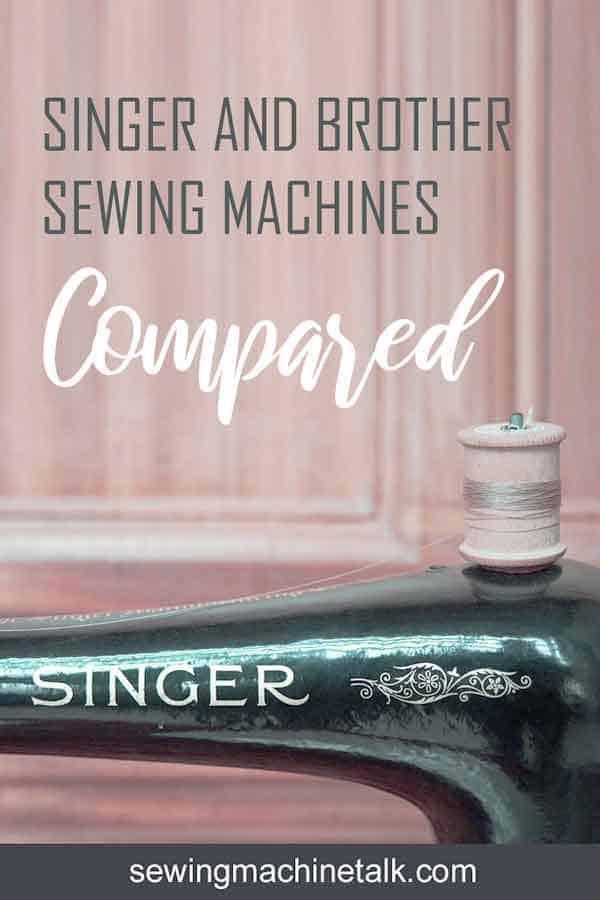 Before we get into the nitty-gritty details of the machines we would like to make something clear. We have used both Brother and Singer machines and have been very happy with both brands

We are talking about the two biggest brands in the sewing machine industry so there are no bad machines here in the lineups. It’s primarily a matter of features, prices, and preferences.

Here are our recommendations based on the different types of machine.

Should I buy a Brother or Singer sewing machine model?

It ‘s impossible to say which brand is the best. They both have a lot of models to choose from, and the lineup is quite extensive. So this question always comes down to what you will do with your machine.

If you’re living in small-town or in the countryside you might also find out where is the nearest dealer and repair shop are. You might need them once in a while so it could be a good idea to go with one of the brands they carry.

That being said we do have some opinions on the matter.

If you’re looking for a straightforward beginner’s model, We would recommend a Singer model.

But if you really like to have a lot of features or if you want to have a ton of settings to choose from such as stitches, embroidery patterns, letters and so on you would probably be more happy with a Brother machine.

A difference you will notice when you start researching the lineup from Brother and Singer is how computerized the models are. This is important if you want to do more advanced stuff with your machines like quilting and embroidery.

In general, the Brother machines often have a little more tech and features built-in.

Of course you can find Singer machines which are really advanced as well, but in general, we find that the Brother machines often have larger screens with more features and settings.

Good questions to ask before you buy

Let’s look at which questions you should ask yourself before you decide which brand and type of machine you want.

For beginners, we would choose a Singer machine.

The Brother machines lineup are generally pretty technical and almost all of them have a digital display which can be intimidating to non-technical people.

The Singer machine lineup is less technical and that also means that they are better for beginners and people who are not super technical inclined.

Singer has made some of the easiest to use models over the years, and a lot of people starting out on these machines for reason.

Brother, on the other hand, is well known for their many technical products (like printers) and when it comes to their sewing machine lineup they can also get pretty technical at times with lots of features and displays But don’t let that scare you. Some of the more advanced features can also be a great help in daily use as soon as you get familiar with it.

Here’s an article about the best sewing machines for beginners.

These two machines are cheap and lightweight machines, that you can bring to class.

They’re very popular with beginners and both are great for learning to sew for the first time. Let’s take a quick look at some of the differences between those two machines.

The brother machine has 27 stitches and the singer model only has 6.

When we talk about heavy duty sewing machines we are looking for a robust and durable metal frame. When we say heavy-duty we refer to the type of fabric it can work with.

We want the machine to work perfectly on all types of heavy fabrics such as canvas, denim, and vinyl. We also want to be able to sew multiple layers.

When it comes to heavy-duty machines we will have to point the needle to Singer.

Singer has a long history of building super-strong machines and they are top-of-class in the field of heavy-duty work.

Singer machines are built like tanks, and that’s also why you see so many old Singer machines everywhere. They simply get passed down from one generation to the next because they are impossible to break.

Brother didn’t start producing heavy-duty machines at the cheaper end of the scale until very recently. They introduced the Brother ST371HD two years ago, which is a very good option if you want a robust and sturdy machine and you prefer Brother.

Absolutely loved the singer 4411. This a sturdy and heavy duty machine that would do will do well no matter what type of fabric to throw at it.

Let’s compare it to the Brother model ST371HD.

The Brother has six presser feet and the Singer model comes with four presser feet. Both brands will offer you 25 years of limited warranty.

Actually, the differences between this brother and singer model are not that big a deal at all. If you prefer Brother over Singer you should just go with that model.

In many countries, the Singer 4411 model is a little cheaper than the Brother ST371HD.

That being said, the Brother machine mentioned above can certainly also sew canvas, vinyl and other heavy duty textiles. But if you’re looking for a cheap heavy duty sewing machine I would personally always go for a Singer model.

They are just extremely reliable and have always made good heavy-duty machines. 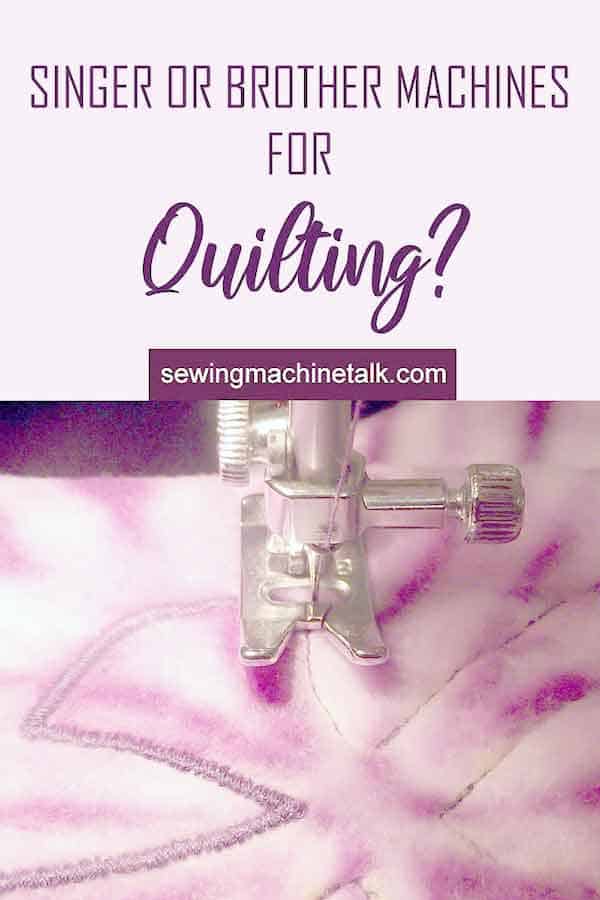 When it comes to quilting machines the brands are performing pretty equal.

Both brands have been producing quilting machines for a very long time and have equally good performance and output.

Things you should look for when buying an embroidery machine:

However, if we were to choose one brand over the over we would recommend a Brother machine for quilting. Brother machines often have more features and that’s great when you are quilting.

You want to be able to do as much as possible with your machine.

Brother machines are really good at all these complicated tasks like embroidery and quilting. They have a long history of computerized technology, and you never go wrong with the brother machine for this type of project.

Before you invest in an embroidery machine you need to make sure that the machine will not only have built-in patterns. You need to get a machine that can also be updated with new patterns from the Internet. This can be done via a USB or Wi-Fi directly.

[su_service title=”Good heavy duty machine” icon=”icon: apple” size=”44″]Be aware also,  that most brother machines do not work well with Macs. So if you are very happy with your Mac computer you should probably consider Singer machine.[/su_service]

Things you should look for when buying an embroidery machine:

So again our recommendation point to Brother.

We have looked at some use cases where Singer is superior to brother. This is for example when we go get the heavy-duty machines, and also for beginners models. We also recommended you choose a Brother machine when you want as many features as possible (e.g. for quilting and embroidery work).

When it comes to overlockers and sergers things seem to even out. Here the two brands are very similar in functionality and just overall performance.

Both brands have a long history of making sergers/overlocker machines, and you will probably be happy either way.

But of course, there are always small differences.

Things you should look for when buying a Serger machine:

Now let’s line up some machines, and try to compare them on the features and price.

We have chosen a set of machines to compare, and hope you’re finding what you’re looking for so we can help you find the best machine.

The brothers CS6000i is one of the most popular Brother sewing machines, and the singer 7258 is also very popular. So many times the battle will be between these two models.

They both do a really good job of basic sewing. And they also very affordable, so every budget it should be alright. Let’s look at the features.

The brother machine has 60 built-in stitches, and it is also very light. This is great if you want to carry it along and if you like to experiment when sewing. The machine also has an easy automatic needle threading system and a very easy bobbin winding system.

The Singer machine comes with more than 100 built-in stitches, and it also has automatic needle threader and is very easy to set up. So no real differences there.

So the main differences between these two machines are in the number of stitches they can do. And the singer model is a little heavier, which is very common for Singer. They are always built with a lot of metal inside the frame.

The brother machine is a little faster. It will do 850 stitches per minute, and the singer model will do 750. So it’s a close race.

The Singer 9960 can do 850 stitches per minute like the brother model, and it also has the option of 600 different stitches.

It’s also a little heavier though (18 pounds) and you’ll have to pay close to $300 dollars for this beast.

(Don’t be fooled by the numbers here, the 400 number overlap here is a coincidence.)

But that doesn’t really matter because they both come with a USB connectivity, so you can upload all the embroidery designs you want after you bought it.

As we mentioned before this is an important feature to look for when choosing a good machine. You always want a machine that you can upload new designs for, whether it will be embroidery designs or other designs.

But beware that you cannot add more stitches to the machine.

The brother machine has an automatic thread cutter and on the Singer, you have to do this manually. This is a minor detail though, and not something you should think too much about.

Once again the Singer is the heavy option. It weighs 23 pounds while the Brother machine is a lightweight: only weighs 13.6 pounds.

So if you are planning on bringing this machine to class or you like to travel with your sewing machine this is absolutely something you should consider before you buy any of those two models.

As you probably know the Singer company is a very old American company. The company was started in 1851 outside Nashville. They’re one of the first companies to mass-produce a sewing machine. So you can say they took the sewing machine to the people.

Today they produce use a long list of sewing machines as well as machines for embroidery, quilting, and sergers. They have always done a very good job with beginners models and mechanical models, hence the long history with sewing machines.

They have 18 different computerized models and several beginners models.

50 years later the brother company started producing sewing machines in Japan. This happened in 1955, and a few years later they were already pretty established.

They have always had the reputation of being really good with the computerized and digital sewing machines. Of course, they also do the embroidery and quilting machines, and the main focus is always been on developing the next generation of tech in the sewing machines industry. 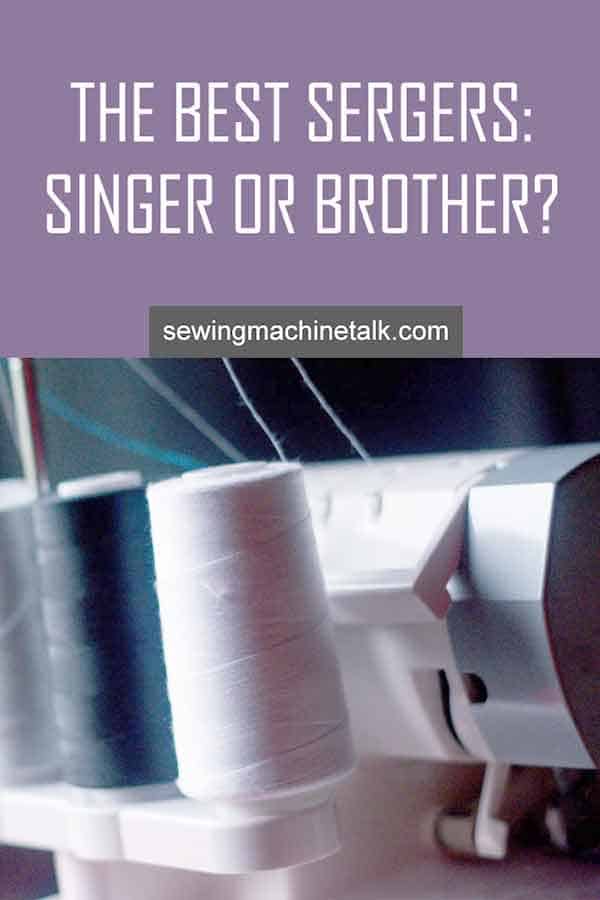