In a world that has found ways to harness technology for just about everything, the sewing machine might not seem like a groundbreaking invention here in the 21st century.

However, when it was invented in the 1800s, it changed the game for women and industries worldwide.

Let’s take a look at how the sewing machine as we know it was born and the powerful impact that it had:

Here’s What the Sewing Machine Was Invented For:

The sewing machine transformed the time and labor-intensive necessity of sewing into a speedy, mechanically-powered task. What took women ten hours now only took one or two—the sewing machine brought with it cultural and economic impacts that could never have been predicted. 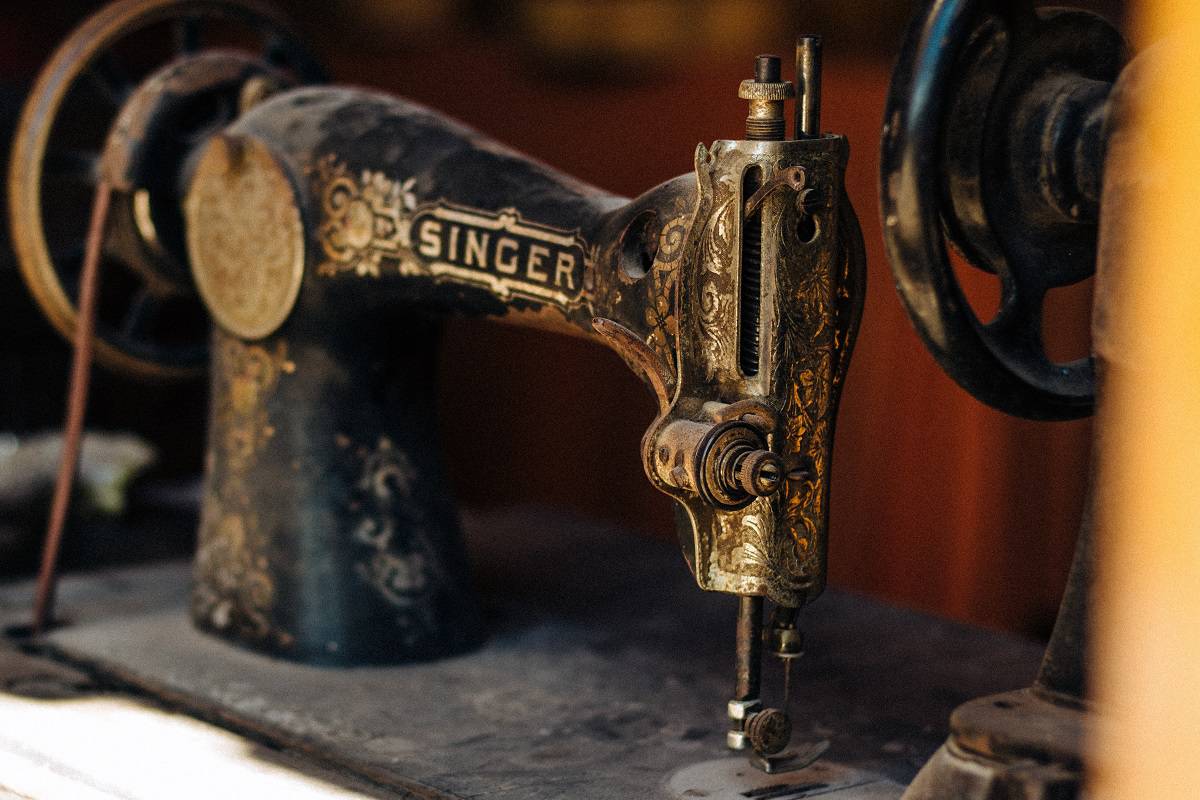 Who First Invented the Sewing Machine?

The invention of the sewing machine didn’t come at once.

Rather, its development made several steps around the globe in the 18th and 19th centuries that led to the creation of the sewing machine as we know it today:

The First Attempts and Designs:

While his interesting concept contained plenty of detail, it seems there is no evidence that this machine was ever truly successful.

This story repeated itself a few times in the early 19th century. Several patents were issued for possible designs, but usually, the patents expired before anything noteworthy occurred.

Although these designs were significant first steps, they were all ultimately unsuccessful.

Finally, in 1830, a true breakthrough occurred, and the first successful sewing machine made its way onto the world stage.

The story doesn’t stop here. Even though Thimonnier’s machine was the first true success, it still didn’t manage to catch on completely.

In the United States in the 1830s, other machine designs and improvements were in the works. Isaac Singer was one particularly notable inventor in the Americas.

He had the idea and skill to make the needle straight and to move up and down. He also came up with the idea to power the machine with the movement of the foot instead of the hand.

We see Singer’s first machine with these trademark characteristics come onto the scene in the 1850s.

Finally, after centuries of attempts, the sewing machine was ready for the world. Singer’s design was the first machine to achieve real success and continue onto mass production.

Singer is still a household name today. If you’re in the market for a sewing machine, you are bound to come across models from this industry leader.

For a detailed look at each of these inventors and their contributions, you can check out this informational video on Youtube:

Where Was the Sewing Machine First Invented?

Thimonnier, the inventor of our first successful machine, was a French tailor living in Paris. At the time, his invention immediately impacted locally, even if it didn’t catch on worldwide just yet.

After successfully operating his first machine, he secured a contract with the French government to manufacture army uniforms. This agreement with the government created the first-ever factory, full of sewing machines, ready to manufacture garments.

However, like many new inventions, it sent shockwaves through the community. This factory, the first of its kind, was burned down. Allegedly, other tailors in the area set the building on fire as they feared these machines would take away their jobs.

Because the machines were ultimately the culmination of many ideas, Singer found himself battling other inventors for various aspects of his machine.

Most notably, Elias Howe held a patent for a mechanical lockstitch that Singer’s machines seemed to be using. With this patent in his name, Howe was able to win royalties from every Singer machine sold during the years his patent was valid.

How Has the Sewing Machine Evolved Over Time?

The sewing machine has been through centuries of evolution, but the end of the 19th century and the beginning of the 20th century were particularly important in its development.

When production exploded in the 1850s and 60s, Singer, in particular, kept looking for ways to evolve his machines and expand his business.

Singer found the idea of interchangeable parts important for his machines. He chose to mass-produce his machines with parts that could be easily replaced when damaged or broken.

This cut down on his costs while making the machines more accessible to maintain.

Another iconic moment in the history of sewing machines occurred when the machines became electric. The first machines required the user to pump the foot treadle to power the needle’s up and down motion.

Part of this popularity was Singer’s innovations to make the machines more lightweight and portable. He focused on making machines smaller and more affordable to cater to home use.

As the machines became easier to move around and operate, they exploded in popularity.

How Did Clothes Improve with the Invention of Sewing Machines?

Before the Industrial Revolution, sewing was a labor-intensive activity. Sewing new clothes and mending well-worn outfits took time, attention, and skill. This made it an expensive and slow-moving industry.

When the sewing machine took hold in the latter part of the 19th century, a new world became possible. The garment industry, as we know it today, was born and faced growth that had never before been possible.

Suddenly, buying new clothes became much more accessible. Before, hand-sewn garments were expensive, and shopping for clothes was a luxury not available to everyone.

With the invention of the sewing machine, clothes could be made faster and at a lower cost.

The consistency of the stitches made by a machine gave sew items a more professional appearance.

Seams were now perfectly straight with identical stitches. These seams were also easier to reinforce and could withstand more wear and tear.

Additionally, some stitches can only be performed by machines. The lockstitch, for example, is only possible with the mechanics of a sewing machine.

With all of these new possibilities in speed, quality, and affordability, fashion as we know it was born. Trends could change quickly since it was no longer important for clothes to be useful and live long lives.

Do Many People Still Sew by Hand in Modern Times?

It is interesting to see the role of hand sewing in modern times. The need to sew by hand has practically been eliminated with the sewing machine. However, hand sewing has not completely disappeared.

For embroidery and other highly decorative stitches, hand sewing is the way to go. This type of stitching isn’t for sewing secure seams of garments. Rather, it is for adding embellishments and contributing to the style and overall look.

Hand sewing has recently experienced a resurgence as people found it a fun and meditative practice. In a world that has become obsessed with productivity, doing an activity in a purposefully slow and mindful way can feel like a revolution.

Hand sewing can allow us a chance to unplug from the technologies that are so pervasive in our lives. It also gives us a chance to step away from fast fashion and other mass-producing systems that negatively impact the climate and workers’ rights.

Did the Sewing Machine Have a Cultural Impact?

Undoubtedly, the invention of the sewing machine changed society and culture in unexpected ways.

One of the most profound impacts of the sewing machine was how it changed women’s lives.

Previously, women would devote countless hours to creating and maintaining necessary clothing for their families. When the sewing machine came along, they could do a 10-hour job in just an hour or two.

With all of this newfound free time, women could seek employment out of the home. This led to a huge shift in culture, as women transitioned from domestic life to a more public, professional one.

There were countless economic implications with this shift as well. In addition to women working outside of the home, the sewing machine impacted and created several other segments of the economy.

As the garment industry expanded, corresponding industries grew with it. Cotton manufacturing grew and expanded to source materials for the clothes.

On the other end, department stores boomed in a way they never had before, with more affordable products to sell.

We can even see an advertising shift due to the invention of the sewing machine. For the first time, industrial products saw women as their prime purchasers.

Singer spent a large budget on advertising and marketing his machine, and these ads targeted women directly.

The sewing machine came about as a way to give a little rest to the fingers and eyes of women around the globe.

Although it took over a century of attempts, the invention of the first successful sewing machine became a global phenomenon.

Not only did clothes become more accessible and affordable, birthing a garment industry, but the lives of women changed dramatically too.

The time to complete a household sewing task was dramatically reduced, giving them freedom for other pursuits.

Jones Sew and Vac: The History of Sewing

ThoughtCo: History of the Sewing Machine